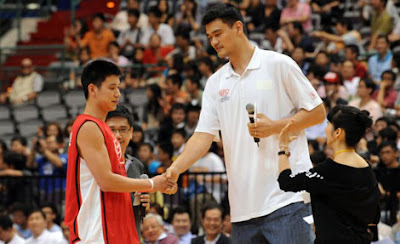 For some players, it comes totally natural.  They adapt to quickly to new surroundings.  They're the center of attention at every meeting.  They make others
feel real comfortable.  They thrive in their new system.

You only get one chance to make a good first impression.  Sometimes your 'one chance' turns out to be the only shot you'll ever get at a pro career.  So make the best of it.

Here's three surefire ways to 'knock their socks off' as soon as you show up.   Then all you have to do is put your thing down on the court, and you're all set to explode onto the international basketball scene.

Go hard everyday
I shouldn't even have to write this one. But things can get frustrating to the point that you lose focus.  Some players totally bail out as if they're begging to be sent home.

Through the good and the bad, go hard everyday.  You gotta remember. You're playing ball.  There's no such thing as a perfect team, a perfect coach, or a perfect player.  No matter where your skill level is, there's always something to improve.

You most likely think the hard practices end when you leave college.

Try practicing 2 to 3 times a day, and having games only once per week.  Most overseas coaches don't put much effort into making practices very interesting either.

I once had a coach that made us do 5 on zero, full speed, ev-er-y-day to start practice.  I swear we had about 50 plays.  The gym was freezing cold.
to make matters worse, dude was a real as*terisk too.  It's hard to stay focused like that.  But you must.

One thing you can do is to concentrate on sharpening a different aspect of your game everyday.  Today shooting, today my reads, today my ball handling skills.  And when you practice them, submerge your thoughts and efforts into them.  That way you're super focused.  Go hard. Every drill.  Every day.

What will happen is nothing else will be so important.  You'll be improving, and not really caring much about anything else.

But the great thing that will happen is your teammates will follow you.  You'll become a leader.  Your coach will look to you as the anchor of the team--someone he can count on.

Combine those benefits with killer game-day results and you'll be working on a huge contract extension.

Show love for the kids
Most GMs and team Presidents like bringing their kids around. As a player on 'daddy's team', the kids will love U.  If you have any kind of swag, then they'll think you're the next Lebron James.  Show them love.  Dribble with 'em after practice.  Teach 'em a move or two.  If you're tall, pick 'em up and let them dunk.

Your now the President's kid's favorite player in the world.

Add some killer stats to the equation and you could be looking at a nice raise when it comes time to get resigned.

Sounds corny, but it's true.

Stay positive.
This is gonna be a tough one.  One thing that's true about most foreign players is that they love to complain.  It can be really contagious.  Before you know it, you think you've landed in the worst city, and on the worst team in the world.

If you read any of my other posts, then you know that you'll be faced with a ton of challenges from day 1.

No TV in the apt? No phone? Late on the payment?

Staying positive in a hostile environment will allow you become the team's centerpiece.  The tougher the course, the more steady you have to be.

Give positive encouragement during team meetings. Just like negativity breeds more of the same, a positive outlook can also be contagious.  And alot more powerful.

I've seen one man's positive attitude help turn around the entire course of a team's season.

A positive mental outlook is the best kind of medicine you can use daily.  It's also a great reason for the coach and the entire organization to love you to death, which once again results in a bump in your next year's salary.
Posted by Unknown at 1:46 AM