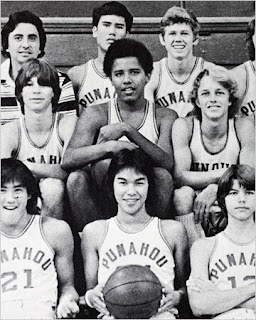 The world isn't a perfect place.  We're not all born on an equal playing field.  But one of the best things about living in these great United States is that we're all given an equal opportunity to rise up out of any circumstance and achieve success at the highest level.


Today, President Barack Obama delivered a unique and powerful speech--one in which he carried the torch of Abraham Lincoln, and celebrated the life of Martin Luther King.  He also put his personal stamp on the progressive civil rights movement by becoming the first U.S. President to mention the gay and lesbian community in an inauguration speech.

Times Have Changed Very Quickly
Today I learned an interesting fact--one that has had a profound impact on my life.  It gave me one more reason to celebrate the courageous efforts of leaders such as Dr. King, Presidents Lincoln, Kennedy, and now, President Obama, by pursuing my dreams with more resolve than ever before.

Traveling with my dad to a local championship game, he shared one of those tidbits of info that can sometimes run freely from one person's mouth but hit the other person in the heart like a ton of bricks.

My dad recognized a car that passed us on the highway and told me who the person was.

"That lady (I forget her name) was a witness at me and your mom's wedding."  he continued. "We all rode from here (PA) to Delaware looking for a place that would let us do the blood work so we could get our license to get married."

And that's when it hit me.  "Delaware?  Why didn't you get married here in Pennsylvania?"

Permission To Play
I was shocked when my dad told me less that when he and my mom got married, it was illegal for an African-American to marry a white person in the state of Pennsylvania.    That was less than 50 years ago!

I started thinking about all the things that young African-American's weren't allowed to do when my dad was young.  And then I compared my youth with his, and of course, related it to basketball.

I thought about all the hardships that players before me had to endure so that I would be allowed to earn a scholarship from a prestigious University like Villanova.

I remembered the movie about the Texas Western team that beat Pat Riley and Kentucky to become the first team with an all black starting lineup to win the NCAA title in 1966.

The Truth Is. Marching's Gone
I could go on and on about the stats and facts black athletes and the progress thats been made.  To me, the craziest thing is that so much change has been made in a really short time.

But we're not there yet.  We haven't reached Martin's promised land.   But we're close.

The sad part is it seems like young African-Americans are becoming complacent.  I hate to say it but it seems like the march is fading.  Much progress has been made, but if things don't change soon, the pep in our step will be gone.

Small Town. Big Opportunity.
When I was growing up, basketball was life.  If there was one thing that our small town could hold their hat on, it was that we were gonna be good at basketball.   The game was keeping guys off the street.  It was also giving guys opportunities that wouldn't have existed without it.

I'll say it.  There was no way I was getting a full ride to 'Nova if it wasn't for basketball.  No way.

So when I see our local kids aren't utilizing one of the proven paths to success, it sickens me.  Sure things come in cycles.  We weren't going to remain dominant forever, but nothing great ever happens without a greater effort.  And right now, I don't see it.

When it's more cool to sit in the crowd and dis your peers than it is to suit up with them and play for a chance to make history, the marching's gone.

When knowing how to roll a "j" is searched more on youtube than how to shoot one, the marching's gone.

When kids are passin' up full ride scholarships to pursue careers in the sale of street pharmaceuticals, the marching's gone.

Keep Bangin'
It's funny how quickly time passes.  Before you know it, life will be happening all around you.  Shoulda, coulda, and woulda are a waste breathe.  There's no turning back.

Basketball isn't the only path to the opportunity of a life-time, but if it presents itself,  you'd be a fool to throw it away.

As for Abraham's proclamation, Martin's dream, and Barack's lean forward,  let's keep progressing -- let's get back to making the most of every opportunity.   We've earned the opportunity to have one, let's not waste it.

I tell ballers all the time, if you keep knocking at the door,  sooner or later, somebody's gonna answer.  Keep Bangin'!