Why Americans and Europeans Play Basketball So Differently 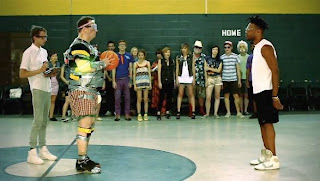 They both love the game.  They use the same sized ball, and have epic hoop dreams.

So why do they play the game so differently?

At first glance, it's not so easy to tell.  But when you look closely at the way American and European kids learn the game of basketball, you'll see some
fundamental differences.

Here are some reasons why.

Starting 'em young
My son is four years old.  We live in a small city outside of Madrid, Spain, and he's already started basketball practice--for his team.

Practice is sorta like any you'd see in America. They play basketball tag.  They do layup lines.  They even learn defensive slides.  One thing you won't see though-- a scrimmage.

Pick-up games
Go to any popular outdoor playing court on a nice summer day in the U.S.A., and you'll see players of all ages and skill levels playing 5-on-5.  In most places they call them 'pick-up games'.

No coaches. No referees.  Just basketball.

They do this in Europe too.  But with a different ball and playing a different game.  It's called futbol (soccer).

The School System
If you look a little deeper, you'll see the differences are embedded inside the national education systems.  The American education system divides sports into seasons, allowing kids to pick and choose the different sports they'd like to participate in.  This gives  kids the choice to try a variety of sports.

Still, players may choose to focus on one sport, and play throughout the entire year. Organizations such as AAU, allow this to happen with basketball.  But choosing to play AAU is not a mandate to play only basketball and nothing else.

Europe is different.  I have a friend named Carlos whose daughter is a phenomenal athlete.  She's a proven distance runner.  At age 6, Sara's already won international competitions.

They live in a small Spanish village where sports are very popular. As Carlos explains, he's getting courted by every coach in town--basketball, soccer, tennis, skating, and track.  They all want his daughter to play for their 'club'.

But one must be careful to choose wisely in Europe. First, because its expensive.  Second, because choosing to play a sport is a year-long commitment. Third, because kids must choose at a very young age.

As Carlos explains, Sara can have fun with basketball, track, and a few other sports for one or two more years.  But when she turns 8, she's gonna have to choose one and stick to it.

Club-Hoppin
When I was growing up,  I played for my high school team, my AAU team, and 2 summer league teams.  I also had a group of friends that I would call up regularly to go out and play together at the community center or blacktop.

That doesn't happen in Europe. European players belong to one team.  It's called a club.

All workouts are with a club.  Practices are under supervision of the club.  All games played are with the teammates and coaches of the club.

Practices and games are highly structured--from warmups to the final stretch.  It's the same for youth organizations and professionals.

Remote Control
So when you look closely at the two, you'll see a huge difference in the amount of control over how and when they play the game.

American players may train just as much individually as they do with the team.  They can also belong to many teams.

Whenever Europeans play, it's gonna be in a controlled environment. There's not a lot of free play.

The Fundamental Difference: Its Where the Work Is
Ok we've established how the differences between the two players are found in their playing styles and skillsets.

The average European player is fundamentally sound, a solid shooter, and reads the game extremely well.

Drill after drill and lecture after lecture has been conducted under the watchful eye of a coach or trainer.  They've only be set free to play in games, with the teammates from their clubs, and in the confines of their system.

And they start right away.  Not even my four-year-old gets a time in practice to throw it up and 'just let 'em play'.  That's deep, and it will have a lasting impact on his game for years to come.

In the U.S., players thrive on creativity, grit, and hard work.  They combine a number of influences to develop their own personal playing style.

The Future
Both players are becoming increasingly better at what they do.  They are also paying more and more attention to what the other is doing-- mimicking moves and training methods.

Europeans are beginning to pick up the ball and tap into their creativity.  Americans are adding the Euro-step and starting earlier and earlier with professional instruction.

The future will bring an excitingly skilled player with a fine mix of fundamental soundness and creativity.


But no matter what, any difference that remains will be traced back to the same place--and that, of course, is where the work is.