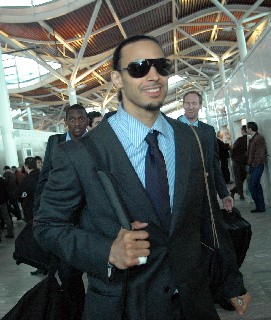 So you've got your contract and plane ticket. You've also got your bags packed. Soon, you'll be with your new teammates in a foreign country getting ready to
start the season.

The hard part's over. Right?

Take the following tips very seriously so you can hit the ground running when you get with your new team.

Get Used To It
Even if it isn't your first rendevoue, you should insist that your agent meet you when you get there.  Having your agent there applies extra pressure on the club to honor everything in your contract straight out the gate. Trust me when I tell you having all the little things you need to get settled and get started, right away, makes things alot easier.

Get With The Boss
Whether your agent meets you or not, insist that the GM is the one who shows you around the city. Most importantly, make sure the GM shows you where you'll be living.  Some teams designate a team manager, but you want the GM there because he has the power to change things quickly if stuff ain't right.

Tip: DO NOT in any circumstances, agree to be shown your apartment by another player.  You will be sorry.

Make sure your apartment has all of the following; sheets, blankets, pillows, eating utensils, tv, telephone, wifi compatibility.


Get Comfortable
Note the words 'has' and 'function.'  Don't be surprised if the cable TV or internet isn't hooked up yet.  Matter of fact, consider yourself lucky if they are.

Try to open up to their way of doing things as much and as quickly as possible.  As long as they don't ask you to eat something you're allergic to, or do something that stands in the way of playing well, then give it shot.  Try to enjoy the experience.

I ain't saying to forget about calling home. They BETTER help U do that. Most times teams will let U use the office phone. If not, remind them.

Go there all day if U have to. This will do two things.
But U got a job to do. And that's to dominate on the court.  Having a bad attitude because you don't have youtube for a few days won't help you at all.  There's no way you can let it destroy your opportunity.

You're there for one thing only.  To get better each and everyday.  In doing so, you'll prove that you're an extremely valuable player that deserves the best.
Once that happens, every need and desire will be fulfilled... well...at least in a day or two.

Get Acquainted
This one is often overlooked. Greet everyone with a firm handshake and smile. If its customary to do the kiss thing, then U should consider doing it.

Remember, they invited you to play for them, in their country. The least u could do is show interest in their way of doing things.  It goes a long way.

Tip:
Have lunch with a veteran or team captain.  Ask things about their career, the city, the coach, the team history and culture.  Its always good to establish a good rapport with the most respected player on the team.  If you're lucky enough to hit it off, it's a relationship that may work in your favor for years to come.

Tip: Respect the young buls. They already will worship the ground you walk on.  But its common that the older guys on the team will trash them. Show them love, and they'll run through a brick wall for U. They're also great partners for  workouts before and after practice and games.

Get Over It
Back to the things that were supposed to be in your contract when you showed up. Foreign clubs have a good way of waiting until the last minute to do some really important things... like turning on the internet!

If U get to the apartment and these things don't work. Get mad then get over it.

2. Help you get on their nerves.  It's necessary if you want them to move any faster.

Get Ready
It's a long season.  Being mentally prepared from the outset will be the best medicine. Set goals for yourself--training and performance goals.  Find a routine and stick to it.