Myth: Players Are Defined by the Number of Championships. Truth: Nobody Really Cares About That Bulls%@t 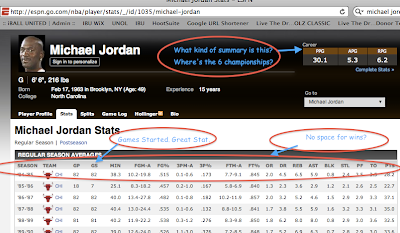 At this time last year Lebron James would've never been considered for 'Greatest Player of All-Time.'  If 'Bron wouldn't have won a championship, he'd still be on the outside looking in--sitting right next to Charles Barkley and a bag of Popeyes chicken--proving, once again, that a player's career is defined by championships.


If championships are so important, why aren't they listed on any nationally recognized career stats sheet?

If winning is such a big deal, why isn't the NBA's winningest player one of the top 20 paid players?


Proof
Do a google search for 'Michael Jordan career stats.'  He's is one of the most accomplished basketball players of all-time.  He's currently tied for 10th on the all-time list with 6 championships.

But looking at MJ's career stats on NBA.com, ESPN.com, or any other major sports website, and you won't see anything about the number of chips he won.  And that's bullstat!


What About The Wins?
Another stat you won't find on any player's stat sheet is the number of games they've won.  This bleacher report is about as close as you're gonna get to learning which active players have the highest winning percentage (Manu Ginobi,  #1, 70%, 2011)

So if winning is really so important, what's up with the stats sheet?  Where's the win column?


All or Nothing
I don't think it's unfair to judge a player by the number of championships he's won.  That's why we play the game--to win.  But you can't let championships be the gold standard for basketball success and
not list the number of chips a player's won on his career stats sheet.  Nor can you fail to show love to the 'big chip's' little cousin--the win.


Hypocritically Correct
My niece just started her career at a Junior College in Maryland.  I really respect Jaz cuz in a time when its all about individual accolades, she still approaches the game the way an old school dude like me can really appreciate.

She's the ultimate team player.  She takes good shots, and she does everything she can to help her team win.  And when she loses, no matter what the stats sheet says she did, she's disappointed because she lost, and that's all that matters.

Unfortunately, she's one of a dying breed.

Turn on the TV and all we hear is about is wins and championships.  But if these things are so important, why doesn't the money say so.

Of the 10 NBA players with best winning percentage, only Kobe, Dirk, Lebron, and Amare are also among the top 10 paid players according to this report.

Now I understand star-power and upside and stuff like that, but something's wrong when 3 of the top 5 highest paid players in the league never even won their division, let alone an NBA Championship.  But nobody will argue about these guys' (Mel, Joe Johnson, Amare) ability to fill up the stats sheet.

You don't train your dog to do tricks by giving him treats for disobeying your commands.

Don't preach wins and championships, but reward players who lose.


To me.  It's hypocritical.  The total disregard for wins in the stats column is not only totally wrong, its also sending the wrong message to young players like my niece.

Unclely Advice
So until a change is made, until players are recognized and rewarded for wins just as much as they're rewarded for games started, rebounds, and points, then I must disconnect my personal approach to the game when giving advice to young players--such as my niece.

It doesn't pay to be a winner.  In the end.  Nobody cares.

Go for yours.  Get stats.  Get money.