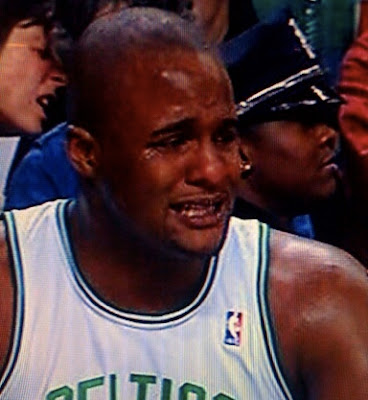 If you ain't 100% committed to being the best player you can be, then this post ain't for you.

If you habitually lie to yourself and to others about your ability to play the game and the things you are doing to achieve your goals,
then you might as well close your browser right now.

This post wasn't written to make you feel all rosey inside.   It may even hurt your feelings.  So if you don't like the honest to goodness truth, then click the back button or go somewhere else to hear how great you are when the reality is...unless you make a conscious effort to change, and do it fast, then you can kiss your career goodbye.

The Hoop Fairy
Is your goal to play professional basketball?

Have you said some of the following things in the past 3, 6, or 12 months?

"I really wanna make it."

"I'm gonna work harder than ever on my game."

"Nothing's gonna stop me this time."

These words are uttered so freely these days that it's really hard to take people seriously.  If this is you, then you may want to take these next paragraphs pretty seriously.  It may turn out that you've mistaken Hoop Dreams with Fairy Tales.  They are NOT the same.  If any of the following fit you, then do us all a favor, stop getting our hopes up, and save bedtime stories for when you have kids.

Are You Sure About That?
To each his own,  but I could never follow a 'leader' that talked alot.  It's just something about a person who's always talking about what they're gonna do.

You can almost hear it in their voice why they say it.

I be thinkin, "So you're standing there tryin to tell me something that you don't believe yourself. I can hear it in your voice."

These people rarely end up doing anything, except for what comes next...

Oh So THAT's What Happened
You can always tell when a person was all talk from the start.  Check back with them a few months later and you'll probably hear something like this...

Blame The Coach: "My coach is wack.  He don't know what he's doing."

Blame The Teammate: "My teammate's a gunner.  I should get more shots."

The Grass Will Be Greener: "I can't play in this system.  I need to go somewhere else."

The Quitter: "I'm losing my passion to play.  I can't wait for it to be over."

If any of these are you, then you are destined for failure.  Period.  End of Story.  Quit basketball right now, and stop wasting everyone's time and gas money for going to see you play.

Be Realistic
Look.  Going pro would be great, but think about it,  it's probably out of your reach.  You're undersized.  You aren't that strong.  You ain't the fastest player in the world.  You play for a small school and you're from a small city.   I mean seriously, nobody ever makes it from there. You're a good player,  but nobody really thinks you're good enough to make it.  They just tell you how good you are just to be nice.  It's OK if you don't make it.  People fail all the time.  I mean people never thought you'd make it anyway so it ain't like you'd be letting anyone down.

If you believed any line of that crap I just wrote, then yes, it's time to give up.

Fake It Til You Make It
Some people just like to play the part.   They like the lifestyle.  They like the look.   Saying they play ball makes 'em feel all warm and fuzzy inside.   They like all the perks that come with being a baller.  If that's you, then great.   Just be real about it.

You don't have to want to be a pro just because you play basketball.  Some players use ball just to get a free education.   They go to a university and make friendships that last a lifetime.  They use being a ballplayer as a tool to build powerful, personal and professional networks that become really useful in the next phase of their lives.

Don't get it twisted, these people want to win just as much as the next player on the team.  They just don't have the desire to take on the challenge of becoming a professional athlete.

And that's perfectly OK.  Understanding that you're taking this approach as opposed to playing to go pro will save you alot of stress in the long run.  It will also help you focus your time and energy where it needs to be.  And thats out and about making new friends,  not at the court making jump shots.

Don't Say It, Proclaim it
If you're still reading, then I have good news.  There may be hope for you. But it starts with a real commitment.  Not chatter, but action.  Not just any action.

There's a big difference between talking about it and being about it.  Talking happens when words are uttered without any true connection to the heart.  A proclamation is when you say something that has the 100% backing of your blood, sweat, and tears.

Blood: because nothing worth fighting for will ever come without a fight.

Sweat: because going pro is really hard work.  And then when you think you've put in enough work, it's time to do more.

How Do I Know?
Because I've been there.  I've been the guy with the extra long finger, pointing at everyone around me for the reason why I wasn't where I wanted to be.   I've been the guy searching for a way out, thinking the grass was greener on the other side--that a brand new system would solve all my problems.   I wasn't much of a talker but I did my fair share of scapping one master plan for another when what I said I was gonna do, just wasn't happenin.

But in the end, I did manage to see my dreams come true, and the only way it happened was because I made serious changes.

How It's Done
The only reason you're still reading this is because you think I'm talking to you.  I am.  But if you think I'ma end this with some kinda quick fix, you're sadly mistaken.  What I'm gonna tell you will be quite simple, but it isn't easy to do.  It might not even make a whole lotta sense.   But trust me.  It works.