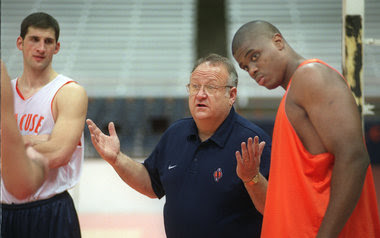 Mom would love to go see you play in a foreign county?

Your brother would take great pride in sayin', "my little bro made it?"

Your coach would love to
tell all his future recruits that he 'produced' a professional player.

If they could, they would help you.  But they can't.

Unchartered Territory
Ok. We wouldn't expect your family to know much about a professional basketball career, unless of course, they played themselves.  But believe it or not, they may know just as much, if not more, than your college coach.  And its not your coach's fault.

Unless your coach is a former player that actually played for an extended period or was schooled about the business of professional basketball, there’s no way he know’s half the stuff he would need to school you, and it's better that he didn't even try.

Its even possible that he had a player or two go to the NBA or make it big overseas. More than likely your coach was referred to a few trustworthy agents by someone he trusted.  He later spoke to the agent, gained confidence in them and then referred them to his player.  And that's where it stopped.

Think about it like this. When you refer someone to a good restaurant, you can't explain how the chef prepares the house special, you just know its good, so you tell them to go there.

So in all honestly, you’re college coach probably has no clue how this stuff works.  And he doesn’t have the time to sort it out.  Its not that they don’t care, they just haven’t been exposed to it enough to point you in the right direction.

For Your Protection
Leading up to the first iBall Exposure combine, we sent out personally addressed invitations to top 500 male and female players in the region.   We also sent out e-letters addressed specifically to their coaches asking for permission to present our camp to their players.

After being contacted by a few players that were on our list, we asked how they learned about us.  Most responded 'word of mouth' or 'from your website.'  But what about the mail we sent you?!?!

They never got it.

The truth is, there’s a lot of scammers out there. So coaches are also trying to protect you. I'm sure they receive all kinds of brochures and emails inviting you to this camp and that camp.  They don’t have time to investigate everyone, so they pass along the ones they know and trust, and the others get tossed in the trash--right next to ours.

Its Up to U!
The truth is that if you want it bad enough, you'll do what you need to make it happen.  You'll investigate every avenue.  You'll ask a lot of questions to people who have been there done that.  You'll google and youtube search all the topics you can think of.   And of course you'll work tirelessly on your game.

No one else can do these things for you. And the minute you face the cold hard reality that you don't have your normal support system there to guide your decisions, and that you are gonna make it on your own, then you've take the biggest, most important step.  You're ready to Do U!
Posted by Unknown at 8:36 PM