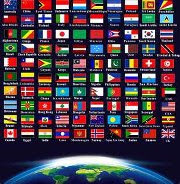 One of the toughest things about starting a pro basketball career at the international level is that you have to learn what leagues and teams are the best to shoot for.

It's really important you know the
the league and team you play for.  They will have a profound impact on your earning potential.  Choose wrong and you could dig yourself a hole and ruin your credibility, no matter how many points you put up.

The only
time you really hear about foreign basketball is if your homey plays somewhere overseas or during the Olympics.

So to start you on the right path, iBall United asked its team of professional coaches & scouts to put together a list of the Top 25 Men's Basketball Leagues around the world.

Depending on the type of comparison, there's alot of lists you could put together.   In making our selections, we only considered the league-wide talent level.  That means we were looking at the level of play for imports and national players across all teams in every league.

Without further Adieu, here it goes...

NOTE: The iBall United scout team is represented by scouts and coaches in 6 different countries throughout the United States, Europe, and Asia.

If you'd like learn more about iBall Scouting, go to http://www.iballu.net/exposure